Behind the scenes: It’s 1994 and Jeffrey is photographing on assignment for Travel Holiday in the Champagne Region of France. His job is to capture the essence of this region with its renowned vineyards and charming, old world towns.

Jeffrey speaks only a little French, but after landing in Paris he loads up a rental car, negotiates his way through the city’s chaotic roundabouts, then finally hits the open road heading toward Epernay, about eighty miles away. His nerves take a beating during the drive, especially without any English signage to guide him, but the beauty of the region creates a soothing natural salve.

The following day several men from the Champagne Chamber of Commerce warmly welcome him with a lavish, three-hour lunch, complete with six different types of champagne. 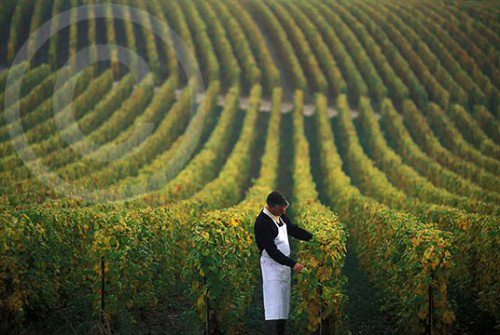 Jeffrey, who likes to hit the ground running, tries to quell the impatient feeling needling him while the men laugh and linger, making sure the champagne keeps pace with their stories. Eventually the bubbles begin to travel to Jeffrey’s head, forcing him to lose his natural, high-energy need-for-speed, and relax and fully appreciate the lifestyle of this region.

He can already tell that it’s going to be one the cushiest stories he’s photographed in a long time, even if he will have to work hard to photograph everything on his long shoot list. 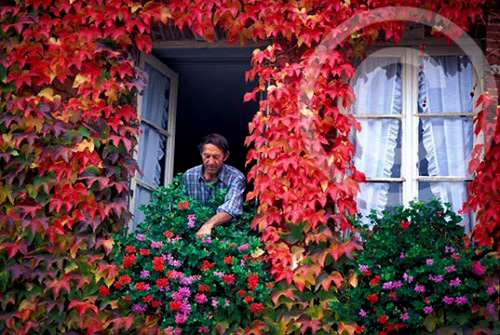 During the next week he plows through more than 70 rolls of film in the visually rich towns of Reims, Damery, Troyes, Epernay and Haut Viller. He photographs everything from vineyards and chalk cellars to wine bars, restaurants, and galleries to people, architecture, and landscapes. He also shoots details like the street sign honoring Dom Perignon, the monk who discovered bubbly.

After spending a morning photographing the interior of Castellene du Champagne winery in Epernay, Jeffrey heads to his car. Just as he’s about to load up his equipment and move on to the next location on his list, he sees two workers carrying a giant champagne bottle along the road in front of the winery.

Jeffrey knows what he sees before him must be included in the story so he quickly takes out his camera again and begins photographing. He works hard to get the angle which will include both the Avenue du Champagne sign and the shadow. After capturing this quirky moment, curiosity inspires him to find out what they’re doing with the giant bottle.

“Once a week we have tastings in the garden and we bring these large bottles out for ambiance. People enjoy sipping champagne beneath these big bottles,” a worker laughs as he explains in his thick French accent.

Though dozens of photographs from this shoot have been published around the world, this giant champagne bottle has captured peoples’ imaginations the most. It has been published in magazines, on cards, and inside Communication Arts where Jeffrey received an award for it.

This image was created with a Nikon F4 camera, a Nikor 85mm lens and Fuji Velvia Film.

Would you agree that this picture begs for a creative caption? I’d love to hear your ideas. Send me your best!