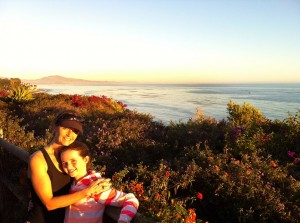 Aaah, Mother’s Day, one of my favorite days of the year. Not because it’s the day I’m fed peeled grapes and fanned with a palm frond as I lay on my fainting couch having my toenails painted (especially since I don’t even own a fainting couch).

It’s because this day reminds me of how profoundly my life has changed since becoming a mom; how that little universe I was comfortably operating in shifted on its axis so dramatically that my head still spins ten years later. How my already happy, full, crazy life instantly became more textured and meaningful, and infinitely more challenging (in all the best ways).

Becoming a mom also suddenly compelled me to start doing things I never imagined I’d be doing. For example, never in my wildest dreams would I have imagined that when Sweet Bug was just a Tiny Bug in preschool that my love for her would inspire me to dig deep into my creative bucket and pull out a quirky idea that would soon transform into a special ritual for both of us.

It started out simply as a little note and sketch in Tiny Bug’s lunch box, but quickly evolved into a more elaborate daily dose of love and learning. Each day I’d chose a new word for her to learn then make a crayon drawing on her napkin and place the corresponding letter cookies in her lunch so she could match the cookies to the letters on the napkin before she enjoyed her tasty treats.

Every single day of preschool I made Tiny Bug a napkin. And yes, she ate and shared a lot of letter cookies, especially when they were long words (bad mommy).

These napkins were simply meant to be momentary messages of love, to connect the two of us while she was away at school, and to surprise her with a new word each day as an extra way to get her excited about learning. 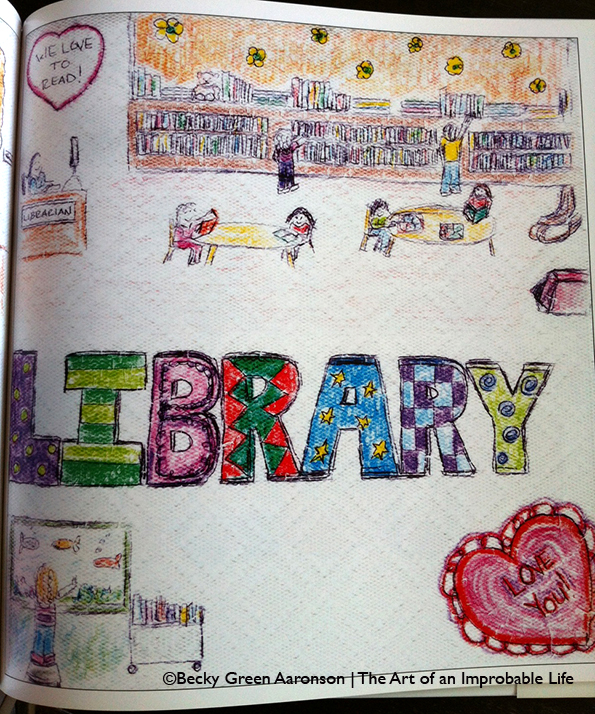 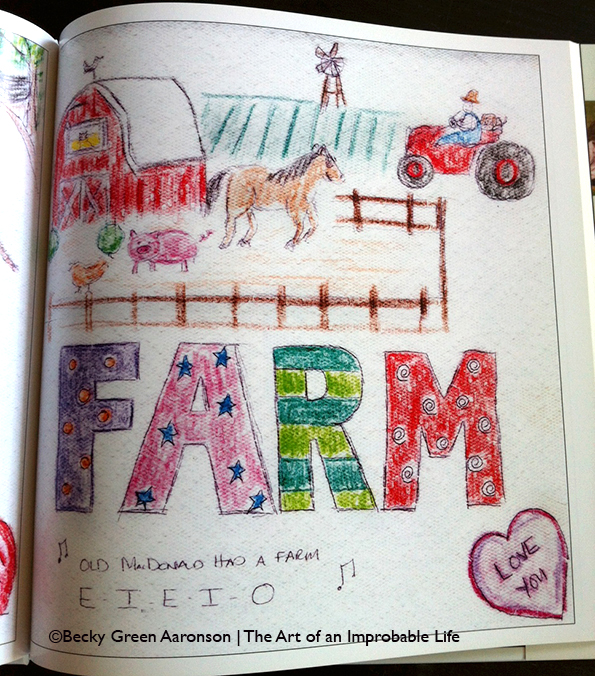 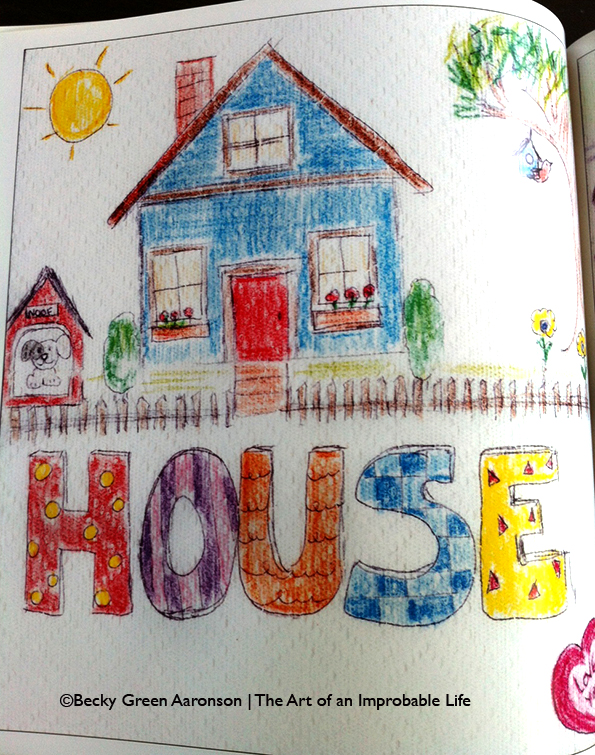 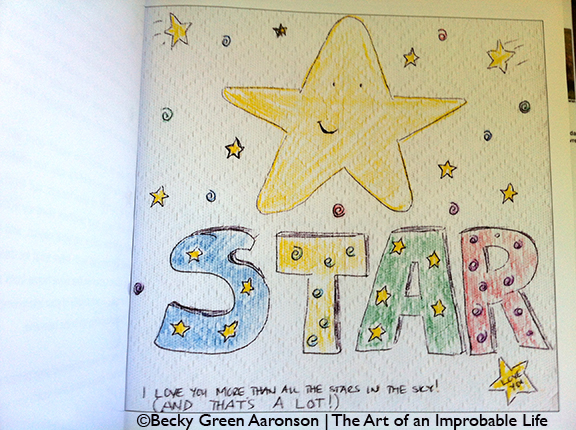 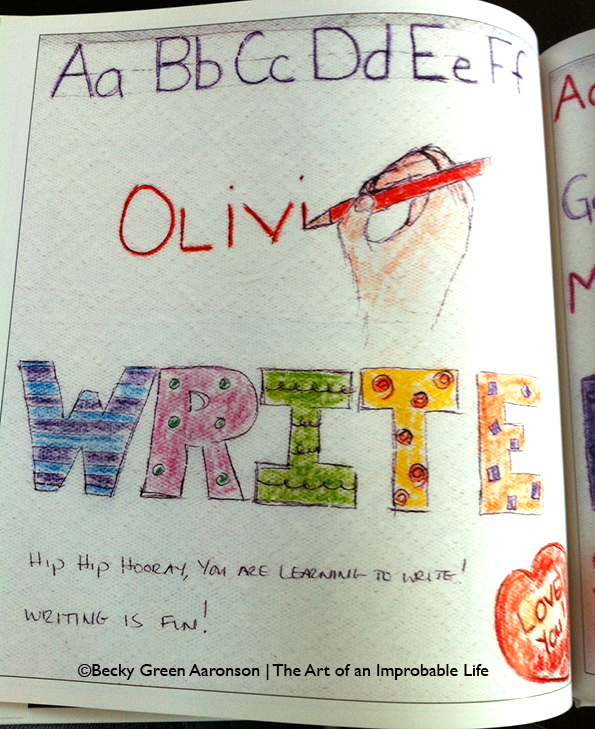 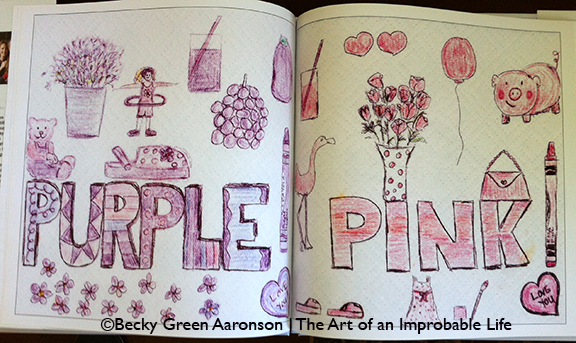 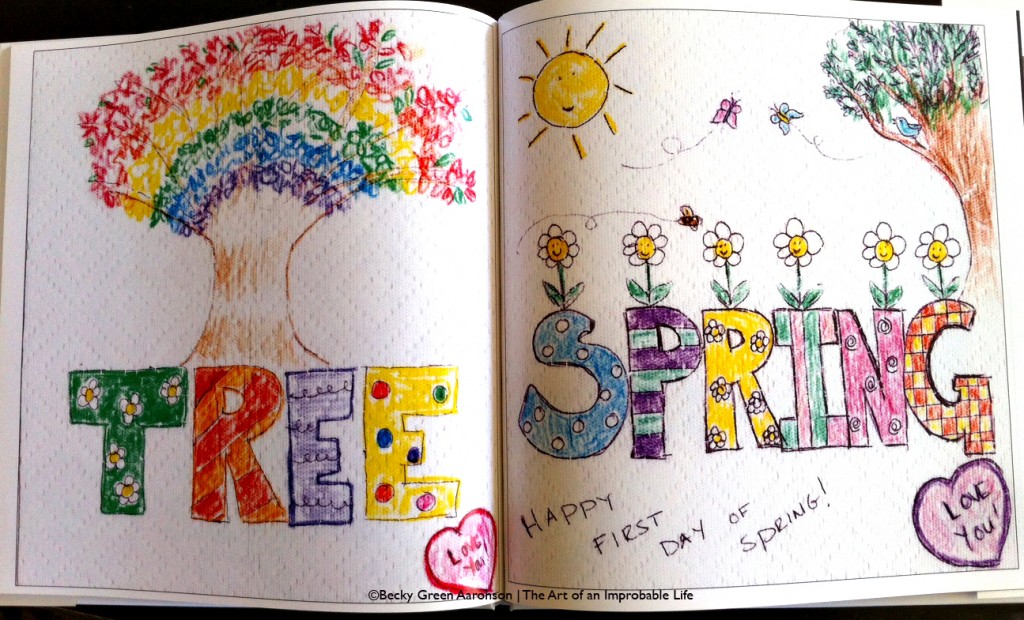 These napkins, which I made long after Tiny Bug went to bed each night, were never meant to be kept and saved. In fact, when Tiny Bug brought them home from school every day and insisted we keep them, I didn’t know what to do with them—especially the ones with glops of food spilled on them. For a long time I piled them in the corner of our kitchen counter. Eventually, they went into a drawer, then finally a box.

It was when we moved to a new house the real decision had to be made. Are we seriously going to move a pile of old napkins? I moaned. I’m sentimental, but not that sentimental. But Sweet Bug was adamant: “Mommy, these are special to me. You can’t throw them away.” So, as you may have guessed, END_OF_DOCUMENT_TOKEN_TO_BE_REPLACED

Hats off to Dave Mason at Santa Barbara News-Press for his fine review of Steve & i in yesterday’s Sunday Books. It’s fun to share Jeffrey’s story with the Santa Barbara community and hear how others have connected with the book. 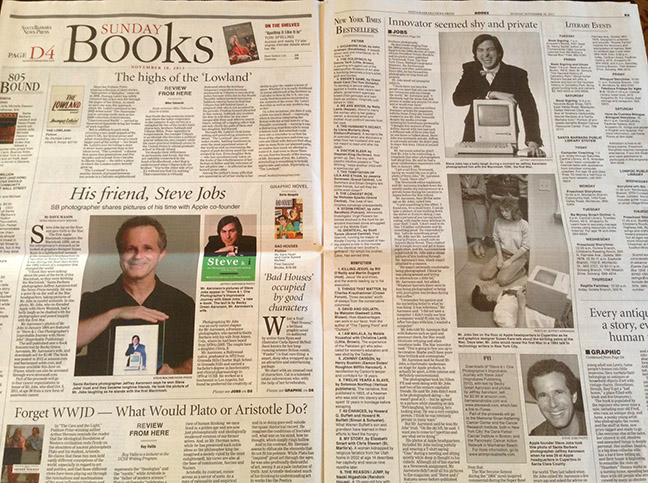 And yes, that’s a young Jeffrey Aaronson in the bottom right-hand corner–a photo taken by Steve Jobs at Apple Headquarters when they were both 29-years old. ❤

Why do you love books? Drop me a comment and share your Favorite Five reasons. Happy Friday everyone! I hope your weekend is filled with fun autumn antics and of course, a delicious book…and why not throw in a pumpkin latte to go with it!

After sixty-five days in Apple’s “review process,” our ibook, Steve & i is finally available for purchase in the iTunes store.

We nearly gave up on Apple, but then remembered our reason for creating this book: to celebrate Steve Jobs and the friendship he and my husband, Jeffrey Aaronson, forged when they were both young and hungry, and to raise money for cancer research by contributing a portion of the sale of each book to prominent cancer institutes.

It’s hard not to chuckle though, wondering what the fine folks at Apple were doing with our book for the past sixty-five days. Keep in mind Steve & i is a little powerhouse 40 page book–including photographs and a video, and it took Amazon and Barnes & Noble less than a week to upload it onto their sites.

Just for fun…because I’m in such a good mood…I thought I’d hold a contest.

Leave a comment with your answer to: “What do you think Apple was doing with our book for the past 65 days?” and your name will automatically be entered into a random drawing for a $10 iTunes gift card. Humor is always appreciated!

Enter by Sunday, June 10th at midnight. The winner will be announced on Monday, June 11th.

In the meantime, we hope you’ll download a copy of the book for $2.99, and if you feel inspired by what you read, please leave a review. Your continued support and kindness is very much appreciated (and will also bring you a bucketload of good karma)!

Here’s the link to the iTunes store: Steve & i: One Photographer’s Improbable Journey with Steve Jobs

In the event you don’t have an iPad or idevice, here are other ways to purchase the book:
Amazon Kindle ebook
Barnes and Noble Nook ebook

Here’s to being inspired, re-living an unique piece of history, and seeing beyond the icon, Steve Jobs, to the complex and charismatic human being who not only “put a ding in the universe,” but did it in a way nobody else ever could.

Steve Jobs inside Apple Headquarters, 1984, just prior to the launch of the first Macintosh 128K computer. ©Jeffrey Aaronson

“An absolutely gorgeous, moving and important memoir. Steve Jobs was complicated, sweet, mad, inspirational beyond reason. Thank you for sharing this.”

Favorite Five Friday is back. I hope you’ll join in the fun and share your favorite five. 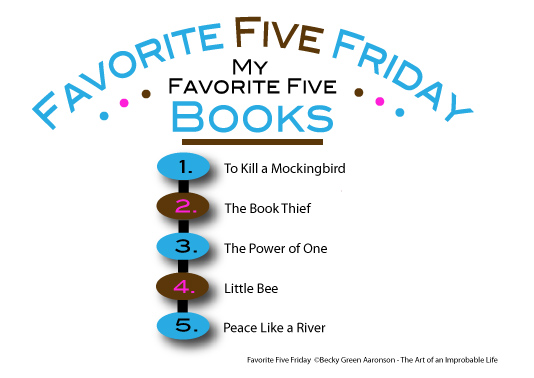 I know it’s impossible to narrow down your favorite books, but take five minutes or less and jot down what comes to mind first. I’d love to know what stirs your imagination. Together, perhaps we can create a fabulous reading list. Here are a few dozen other books I’ve enjoyed over the years (in particular order). 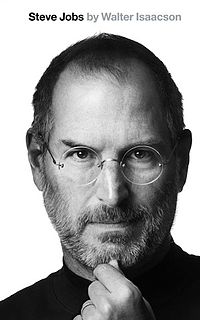 This 656-page book, which chronicles Jobs’ life and personality, and his passion for perfection, is based on more than forty interviews with Jobs, conducted over two years – as well as interviews with a large cast of characters—including family members, friends, adversaries, competitors and colleagues.

Whatever the case, there’s no denying the impact he made on our lives with his ability to inspire those around him, see the big picture, and pour himself into the smallest details of each product Apple created. He may not have been warm and cuddly, and he may have had an ego larger than North America, but somehow he was able to bring out the best in people. And with those exceptional people on his team, Apple and Pixar managed to develop some of the most innovative products ever created, merging art and technology.

The most interesting part of this book for me was the history; discovering the origins of many of the Apple products I’ve used over the years, and seeing how the symbiotic relationship between Jobs and Steve Wozniak evolved into the creation of the first personal computer. Being a design-lover, I was also fascinated by Apple’s design guru, Jonathon “Jony” Ive. It’s impossible not to appreciate the depth of thought he and Jobs invested in every detail of every Apple product created—from the handles and buttons to the colors and curves. The two were perfectly paired in their pursuit of exquisite design because neither settled, and both genuinely respected one another.

Also as I read page after page, I couldn’t help feeling sorrow for the Jobs children—in a protective, motherly sort of way. Even though Jobs asked Isaacson to write this book so his kids would know him better, and even though Jobs’ wife, Laurene Powell, told Isaacson, “There are parts of (Steve’s) life and personality that are extremely messy…You shouldn’t whitewash it. He’s good at spin, but he also has a remarkable story, and I’d like to see that it’s all told truthfully,” –it’s hard to imagine this would be easy for the kids. They seem worldly and wise, but my hope is they hold off reading it until they are well into adulthood, when their grief has faded, and their canvas of memories has been colored by the paintbrush of life. Perhaps then, this raw and detailed book might feel like the gift their father meant it to be.

For the rest of us, Isaacson’s book is a gift worth reading now. Even if it could have been edited tighter and had a little more balance, it captures an important moment in our history  and reveals the passion, genius, and commitment of the man who changed our modern world (flaws and all). 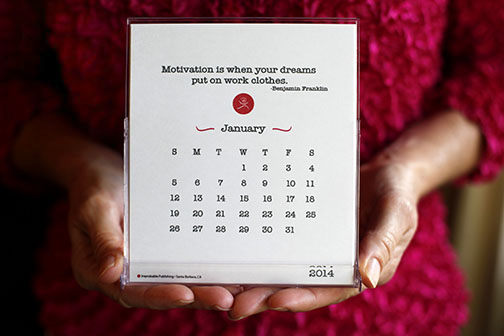