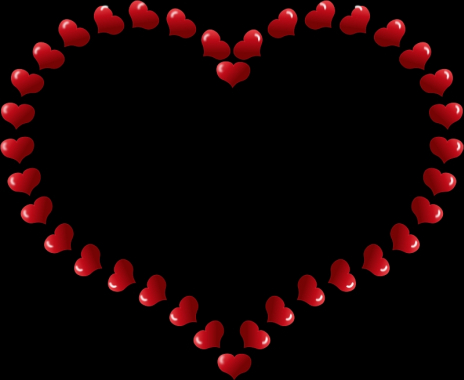 Love. Passion. Amore. It’s impossible to define it in its infinite forms, even though its power shapes nearly everything about us.

On this Valentine’s Day I feel compelled to tell you about a man who continually sets my heart on fire and leaves me weak in the knees with his passion.

This man, by the way, is in serious competition with my husband.

Okay, I confess: I’ve been fooling around.

I can picture the disgusted looks on your faces as you read this news. But try not to think too badly of me, even if this affair has been going on for nearly fifteen years.

It might make you happy to know that this “other man” whom I adore so much, has never once brought me roses or chocolates on Valentine’s Day. Nor has he toasted with me champagne, pampered me with peeled grapes or showered me with sweet nothings. In fact, he has never even uttered a word to me.

The name of this quiet man? Fred.

If you’re concerned about my darling husband, don’t worry, he’s okay with Fred. He even supports my flings with him.

You see, Fred is a driving force in the battle against cancer.

His full name is Fred Lebow, the founder of the New York City Marathon, and also the founder of Fred’s Team, an organization supporting runners who dream of a world without cancer.

In early 1990, after a long illustrious running career, Fred Lebow was diagnosed with brain cancer. He was determined to use his passion for running as a means to battle this insidious disease, and designated Memorial Sloan-Kettering Cancer Center as the New York City Marathon’s first official charity.

His program, simply named Fred’s Team, encouraged runners to gather pledges for each mile they ran and donate it to MSKCC.

Since 1995 Fred’s Team has raised more than $45 million for pioneering research.

How did I fall head-over-heels for Fred?

Simple. Cancer drove a truck through my heart when I was eighteen years old. My dad, who was just 51 at the time, was diagnosed with lung cancer. He died six months later–just a few weeks into my freshman year of college.

A decade later, that same semi-truck looped back around and plowed into my heart once again. This time it was my mom who was stricken by the disease. Her breast cancer left me dazed, my heart barely pumping. All I could do was watch helplessly (long-distance, no less) as she suffered through painful surgery and treatments.

It’s then I dragged my running shoes out of the closet and fell in love with Fred–or more accurately Fred’s Team, and what it represented.

I’d always loved running, but my shoes hadn’t logged more than five miles in a good long while. Somehow lacing them up again and putting one foot in front of the other helped me sort through my anger, grief and frustration. It also helped remind me of my inner strength—even if setting a goal like the New York City Marathon was so absurd I couldn’t bring myself to utter the words to a soul, except for my husband.

When I joined Fred’s Team though, I realized that it was impossible to raise money for cancer research if you didn’t tell people what you’re doing. Eventually I built up my courage and began sending out letters. Unnerving is the best way to describe it–especially since asking people for money is one of my least favorite things to do.

When I confided in a good friend that I felt like I was bragging when I told people I was running a marathon, she gave me sage advice: “Just remember this is not about you. It’s much bigger than you, so get over it!”

Donations immediately began pouring in—along with words of encouragement and stories of how cancer had affected many of my supporters. People blew me away with their generosity.  It seems everybody knew somebody who had been knocked down by this disease.

With each mile I logged and each dollar I collected, my heart slowly began to heal. No longer did I feel powerless against the disease I loathed so much. By raising funds to support researchers working hard to find a cure, I felt like I could finally face cancer and say, “GAME ON, SUCKER!”

That was fourteen years ago, and I have not looked back since.

Since then I’ve run eight marathons (NYC-three times, Paris, Rome, Portland, Santa Barbara-twice), two triathlons, and also participated in a 400-mile cycling event through the Colorado Rockies. With the help of many extraordinary supporters I’ve raised over $60,000 for cancer research. 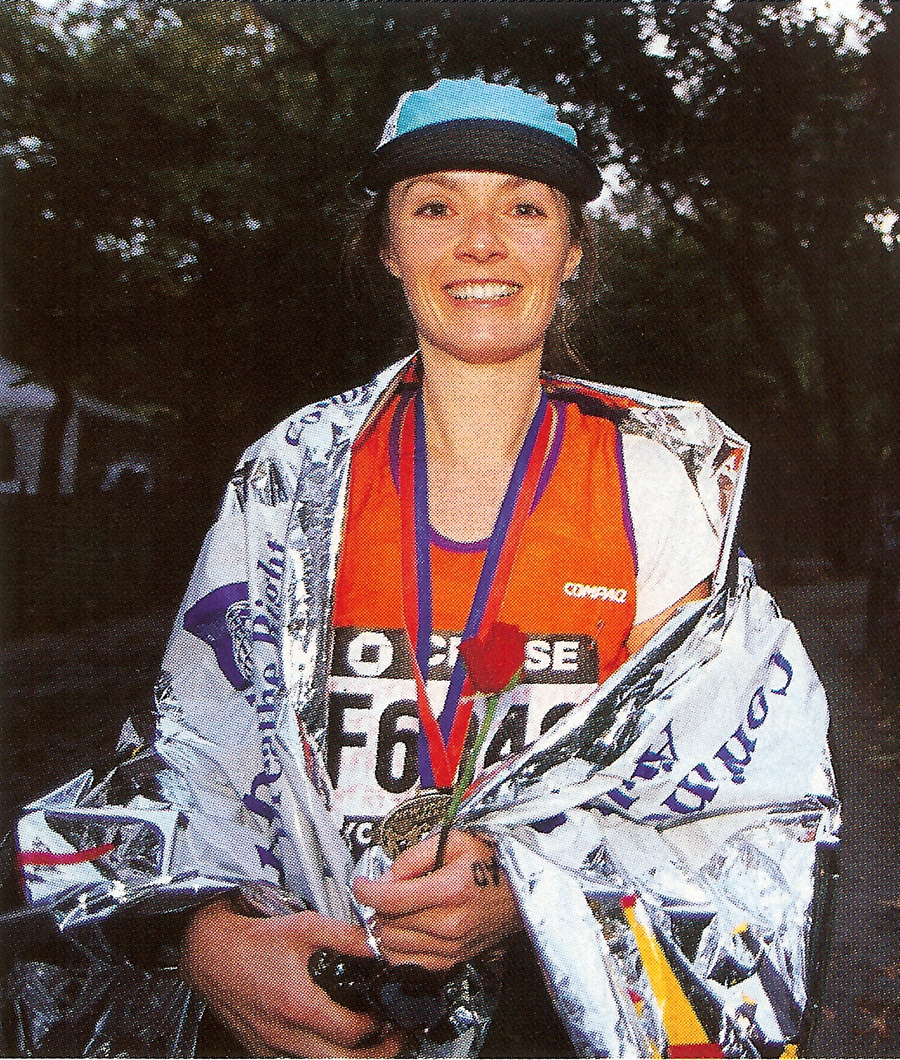 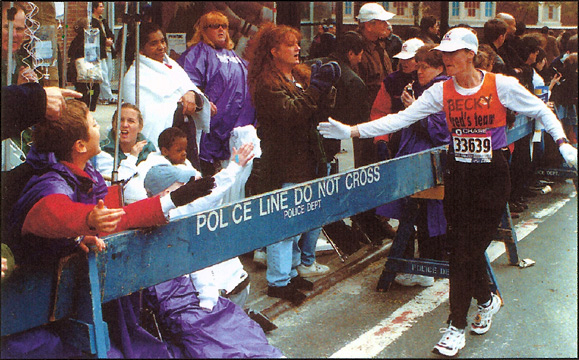 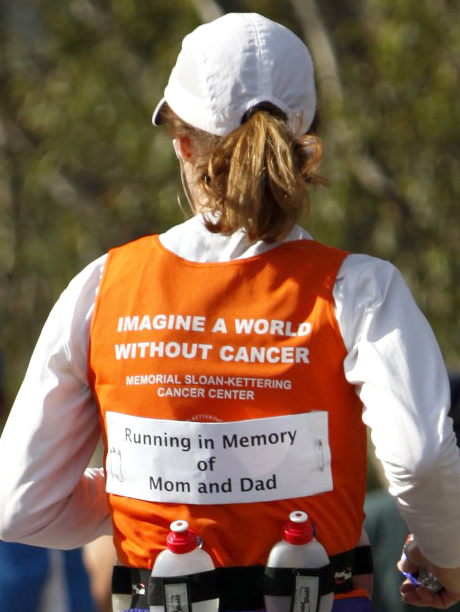 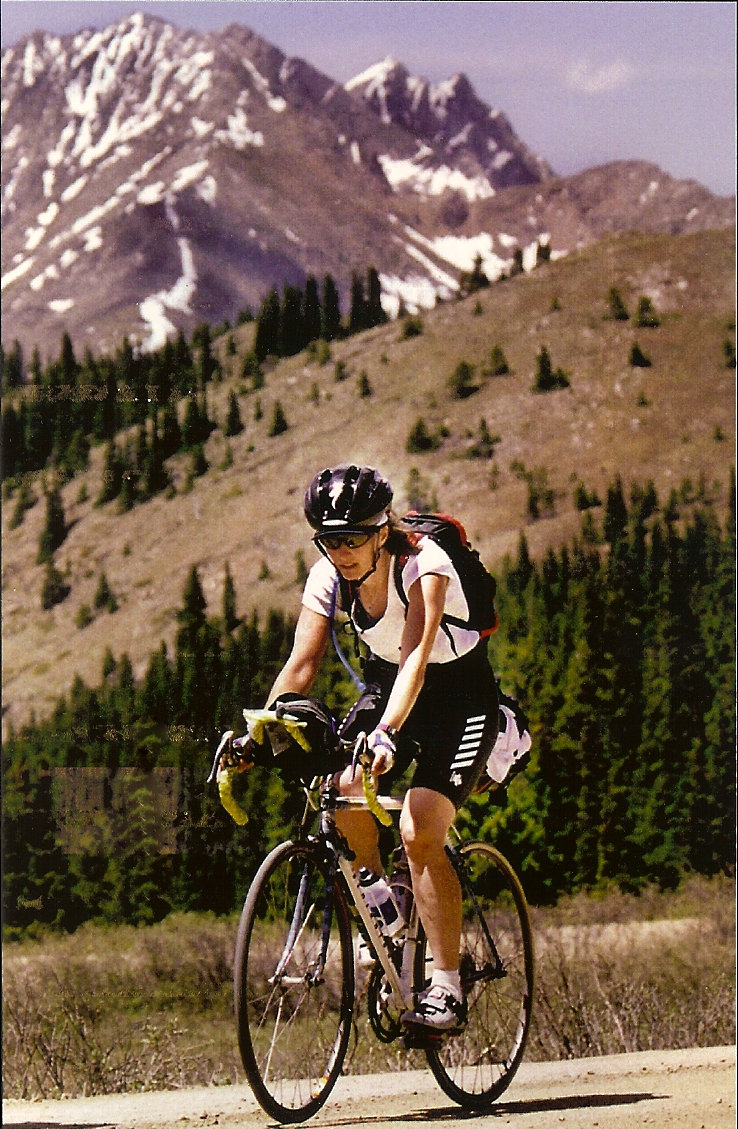 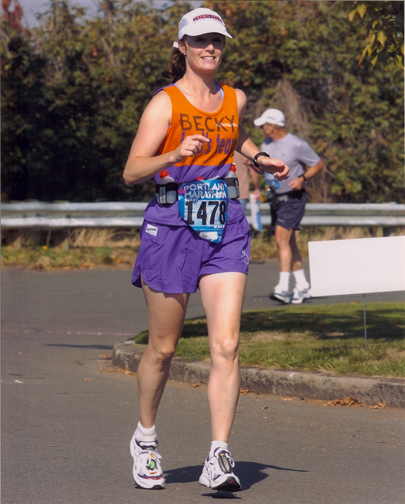 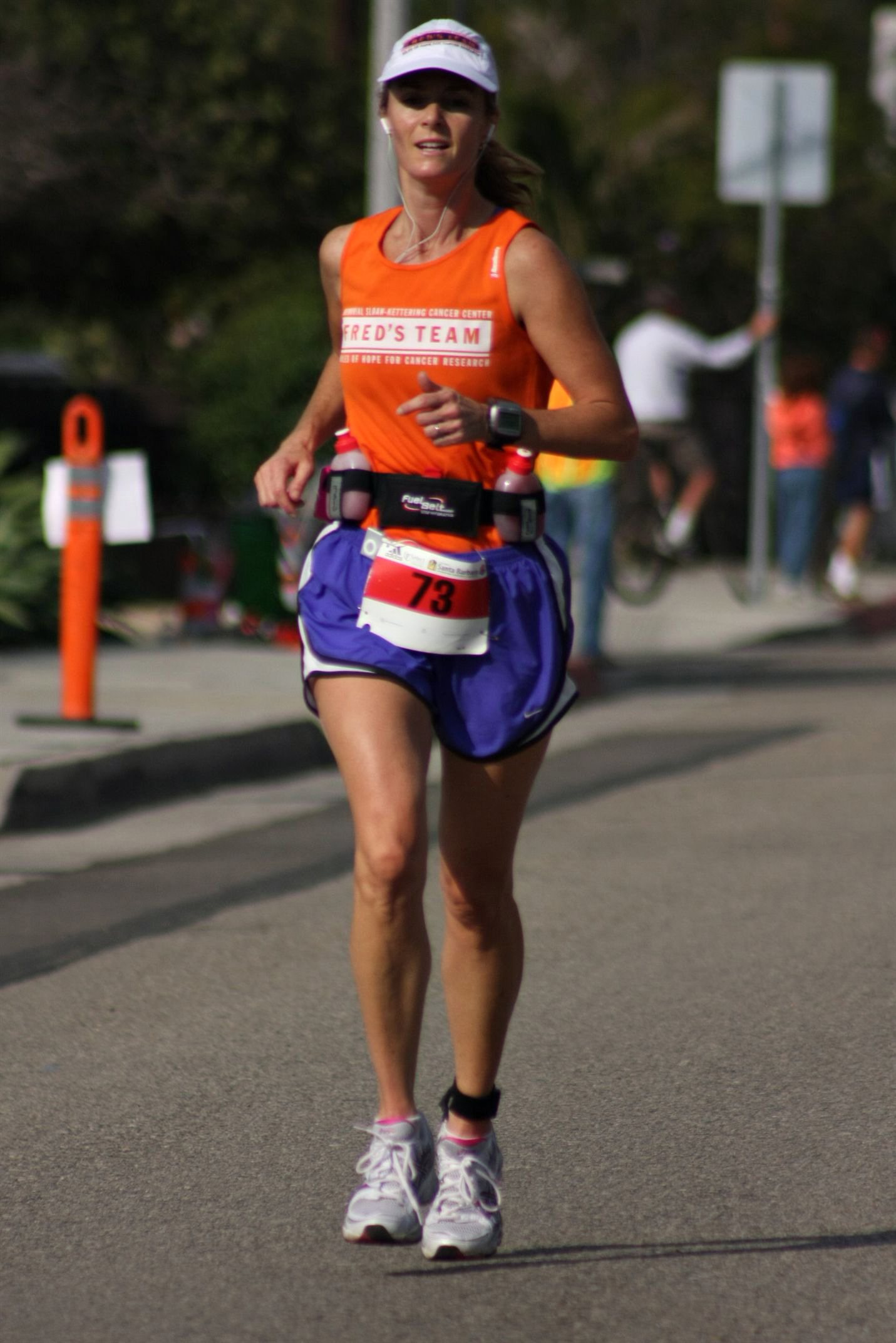 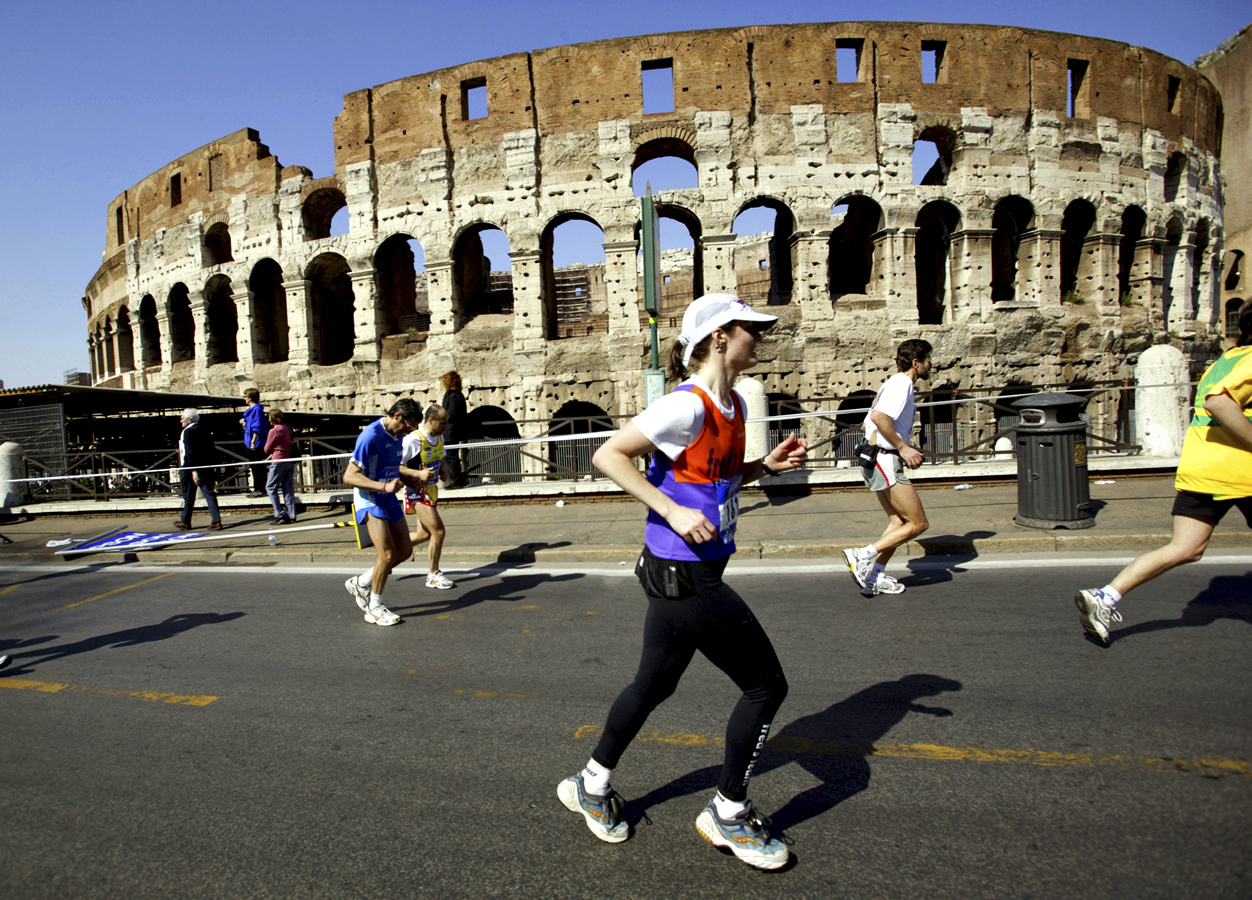 And now Fred and I are getting ready for our next tryst . This time we’ll be participating in a 50-mile cycling event in Solvang, California on March 10th.

Why do I keep doing this? Unfortunately that careening truck keeps smashing into my heart.

My mom survived her initial bought with breast cancer, but later died of colon cancer. My Auntie Katie also died of cancer in 2010. Auntie Margie died of cancer in 2011 as well as Aunt Bertha. Cousins, uncles, friends, colleagues, neighbors–nobody is immune. Every day it’s somebody new. Steve Jobs, Baby Lexi (read my friend Jessica’s story here to learn more), my friend Molly, my other friend A, my friend, Angie’s dad. It goes on and on. But I refuse to give in to this beast, and I hope you will join Fred and me in trying to kick its ass.

Happy Valentine’s Day, Fred. Thanks for being my “other man” for some many years. Your passion and commitment still move me.