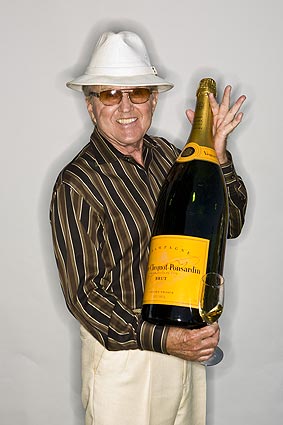 Cork Millner, my writing mentor, whom many of you know I adored, passed away recently. I say “my” writing mentor because I felt a close connection to him, but clearly he was not just mine. His memorial service earlier this week was a testament to that.

Dozens of friends, family members, colleagues and former writing students all came to pay tribute to him.

Cork touched each of us in different ways, but it was clear we all shared one thing in common: gratitude for having had him in our lives.

The day of Cork’s memorial service couldn’t have been more spectacular. The sun arose with aplomb, casting a blaze of color across Santa Barbara’s morning sky, perfectly symbolizing the richness Cork added to our lives with his charm and colorful personality. 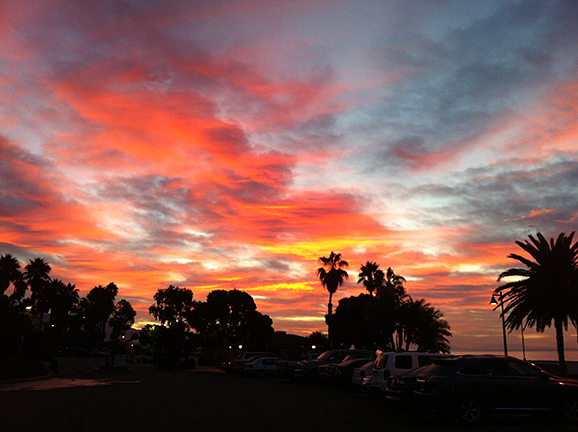 As we gathered for his service inside the cemetery’s intimate chapel, we were wrapped in Celtic harp music, then reminded by Reverend Miriam Lindbeck, Cork’s lovely, long-time friend and former writing student, of all the things we loved about Cork.

He was “old school stoic,” strong and private, yet sensitive and open. He loved fine wine, fine cars and fine writing. He was charming and dapper, and appreciative of humor–especially his own, which was wry and occasionally acerbic. He was confident, hard-working and fiercely proud of his family and his military service, which included 850 aircraft carrier landings.

And then, of course, there was his name. Cork came from humble beginnings in Kansas. He was born Clayton Linville Millner, but when he was a young boy his father dubbed him a ‘real corker.’ The name stuck and the rest is history…with a few twists and turns along the way, of course. After attending Kansas State University he joined the Naval Air Cadet program where he worked his way up to Lieutenant Commander. For twenty-two years he was known as “Corky,” a Navy pilot with some of the steadiest hands around. When he later launched his writing career and became a wine aficionado, he dropped the y and simply went by Cork, the perfect name for a self-proclaimed wine snob.

Like many, I feel a tremendous loss with Cork’s passing, but I’m filled with gratitude for having had him in my life. Because of Cork Millner I am a professional writer, and now an author.

Cork believed in me and championed my work, even when I doubted it myself. If it hadn’t been for Cork’s red pen filled with love, support and generosity, I’d still just be dreaming about being a writer instead of actually becoming one.

Feeling nostalgic earlier this morning, I poured through piles of manuscripts Cork edited for me over the past few years, smiling at the many comments he scrawled in the margins with his red pen. Sometimes it was just a word or two like “Clever lead” or “Powerful imagery.” Sometimes it was a full page. One of the most meaningful comments he ever wrote came to me when I was just starting out. It simply said, “You write in pictures,” which forever changed the way I thought about my writing.

I feel compelled to share a few of his comments below so you can understand why so many writers credit him for launching their careers and why he has been coined, ”The Man Who Launched A Thousand Pens.” Not only did Cork have a gift for writing, but for mentoring and nurturing our creative, self-doubting, hypercritical writing souls. 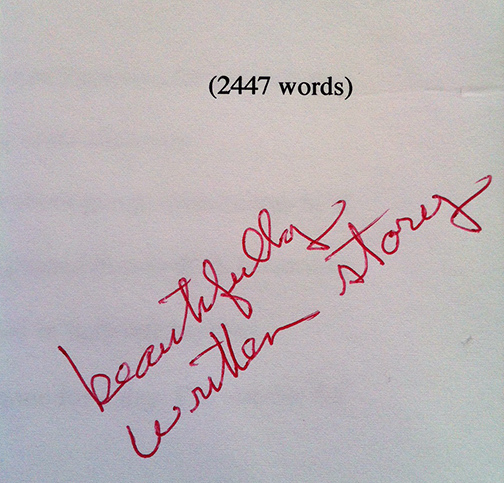 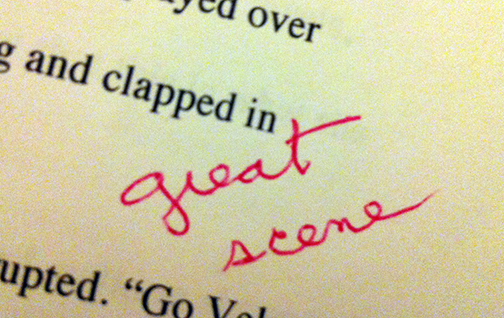 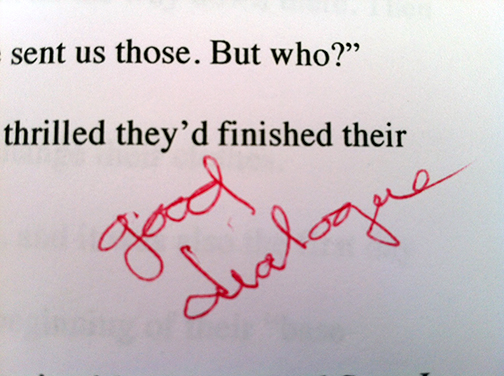 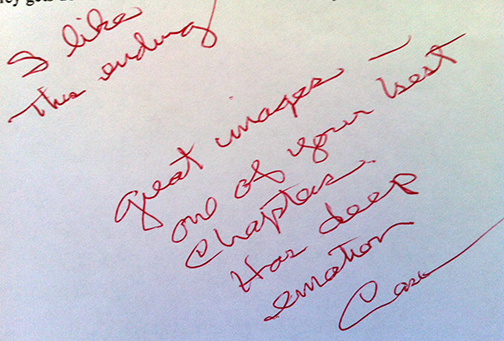 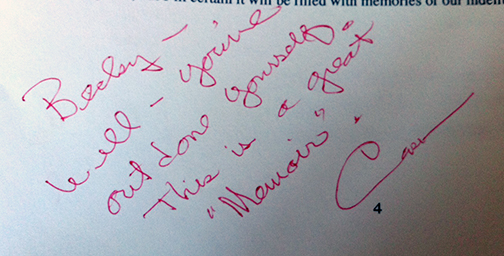 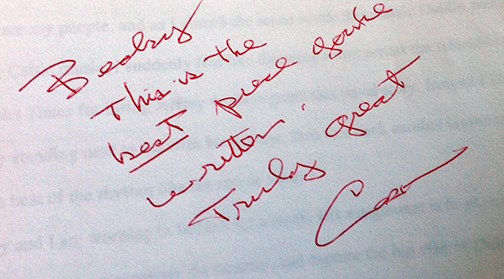 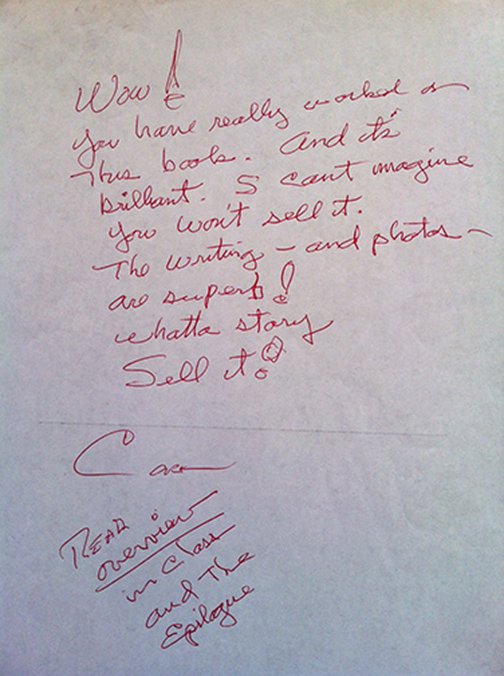 These are but a handful of the generous comments I came across while flipping through page after page of manuscripts. I am certain that every writer who ever took one of Cork’s classes or workshops received similar words of encouragement. Hundreds and hundreds, if not thousands, of writers were inspired by Cork and the words he wrote in the margins of their manuscripts.

Having said that, you will now understand and hopefully appreciate my final homage to Cork. After the throat catching playing of “Taps” during his Military Honors, and the presentation of the flag to his family… 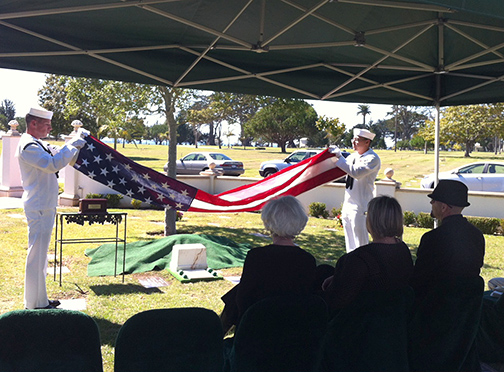 I placed a special red pen in his memorial plot in the Sunrise Urn Garden. 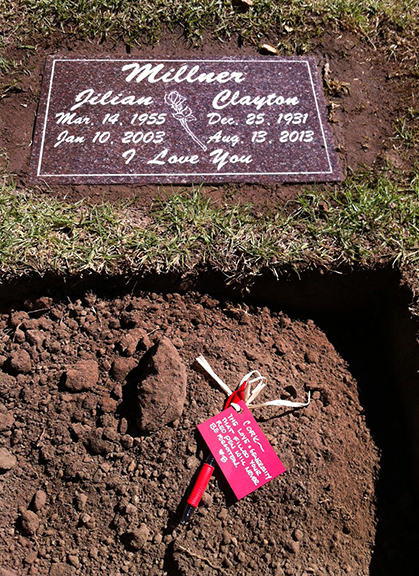 “Cork-The love and generosity that filled your red pen will never be forgotten. ❤ B.”

Two fellow writers, Kaye and Nancy, felt similarly moved and added small cards with covers of their recently published books, thanking him for his support in becoming authors.

Afterward, a group of us writers hugged, cried, laughed, took pictures, then joined his family for a wake at his beloved polo fields in Carpinteria, where we all popped the cork for Cork. 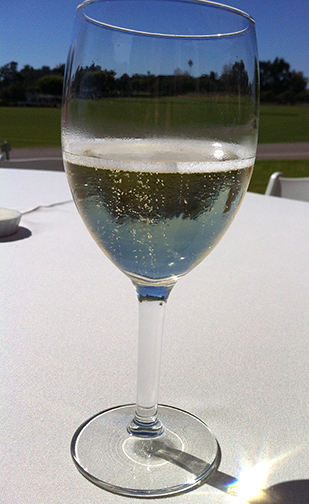 Here’s to you Cork Millner, for making a profound difference in all of our lives.

PS: If you want to know what improbable moment brought Cork into my life in the first place, you can click HERE to read I post I wrote last year.

18 thoughts on “Popping the Cork for Cork”