Behind the Scenes: The year is 1995 and Jeffrey is photographing on assignment for The New York Times Travel Section in Beijing, China. He’s there to do a story about Ritan (Temple of the Sun) Park.

This expansive park is one of the oldest sites in Beijing and is like an oasis in the midst of a teeming metropolis. Commissioned by Ming Dynasty emperor JiaJing in 1530, it is filled not only with massive trees, gardens, pavilions, and small lakes, but many places for people to gather and recreate. Tai chi and ballroom dancing are common forms of exercise found here.

When Jeffrey comes upon this elderly gentleman wearing a traditional Mao jacket, fully immersed in the solitude of his early morning ritual, he knows he has captured the essence of Ritan Park and also created a wonderful symbol of ancient China–still alive and well in modern day Beijing.

At its core, tai chi is a martial art (also referred to as shadow boxing), but it is now commonly practiced to strengthen and promote mind/body health. Jeffrey loved how the man was entranced in the shadow of his own dance, and how the traditional Chinese red wall and green tiles melded with the shadow and gesture, creating pure harmony.

This image was created with a Nikon F4, a Nikkor 85mm lens and Fuji Velvia film.

Postscript: A week after it was published as the cover of The New York Times Travel Section, Broadway’s legendary song and dance man, Tommy Tune, wrote a letter to the editor extolling the artistic merits of Jeffrey’s photograph and how he captured the magic of the moment.

“It was quite an honor coming from Tommy Tune, whom I admire for his artistry and accomplishments in the field of dance,” said Jeffrey. “The fact that he would take the time to write a letter to the editor…there really is no higher compliment.”

Behind the scenes: It’s 1981 and Jeffrey is photographing in Beijing, China. On this day he’s intent on capturing the beauty of the Summer Palace, the former warm-weather residence of China’s imperial rulers.

As Jeffrey crosses a narrow covered walkway, intricately carved and painted with imperial scenes, he notices an elderly gentleman sitting on one of the wooden railings. The man, who seems content to do little more than take in the day’s events around him, is dressed in a Mao jacket and a traditional cap. He is also wearing some of the most exquisite glasses Jeffrey has ever seen.

The spectacles rest slightly askew on the man’s nose. The etched hand-tooled silver that frames the circular glass is worn to a salient patina; the crack in the upper left-hand lens holds a story from long ago.

Jeffrey cannot take his eyes off the man whose face perfectly symbolizes traditional China. When the man glances up, Jeffrey asks—through his interpreter—if he would mind having his portrait taken. “Please be sure to tell him how much I admire his glasses,” Jeffrey adds.

The man’s eyes twinkle from beneath their narrow openings. Then his soft, gravely voice begins wrapping Jeffrey in staccato Mandarin, almost as if the man has been waiting his entire life to share this moment. Jeffrey, who has studied a little Chinese, can only understand part of what he is saying, and must wait patiently until his interpreter finally relays the story.

“He says that he is 84-years old and these glasses have been in his family for two generations. His father wore them most of his life, then when he died, they were passed on to him. He said he would be willing to sell them to you for ten dollars.”

Jeffrey is horrified by his offer, imagining all the things that have passed through these lenses. He takes a moment, then simply says to his interpreter,

“Tell him ‘thank you very much for your generous offer’, but I will pay him double if he promises to never sell these glasses; to always keep them in his family.”

The man squints his eyes in delight, then agrees. Finally Jeffrey creates his portrait. A few years later it becomes the cover of Vis a Vis, United Airlines’ inflight magazine, when they publish a 10-page portfolio featuring Jeffrey’s China photographs.

This photograph was created with a Nikon FE camera, a Nikon 85mm lens and Kodachrome 64 film. 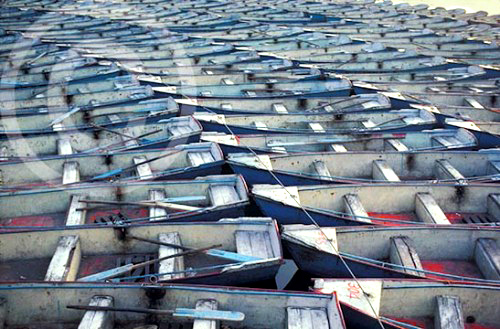 PS: The answer to Tuesday’s challenge is Tibet (November 8th post). You’ll have to wait to hear Jeffrey’s stories to fully appreciate his reasons.