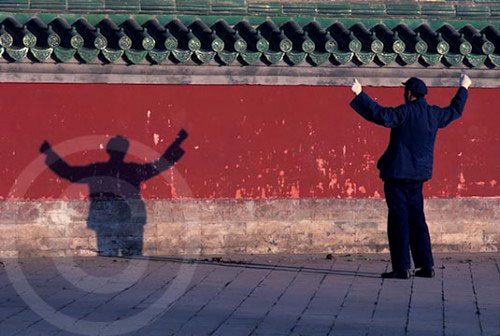 Behind the Scenes: The year is 1995 and Jeffrey is photographing on assignment for The New York Times Travel Section in Beijing, China. He’s there to do a story about Ritan (Temple of the Sun) Park.

This expansive park is one of the oldest sites in Beijing and is like an oasis in the midst of a teeming metropolis. Commissioned by Ming Dynasty emperor JiaJing in 1530, it is filled not only with massive trees, gardens, pavilions, and small lakes, but many places for people to gather and recreate. Tai chi and ballroom dancing are common forms of exercise found here.

When Jeffrey comes upon this elderly gentleman wearing a traditional Mao jacket, fully immersed in the solitude of his early morning ritual, he knows he has captured the essence of Ritan Park and also created a wonderful symbol of ancient China–still alive and well in modern day Beijing.

At its core, tai chi is a martial art (also referred to as shadow boxing), but it is now commonly practiced to strengthen and promote mind/body health. Jeffrey loved how the man was entranced in the shadow of his own dance, and how the traditional Chinese red wall and green tiles melded with the shadow and gesture, creating pure harmony.

This image was created with a Nikon F4, a Nikkor 85mm lens and Fuji Velvia film.

Postscript: A week after it was published as the cover of The New York Times Travel Section, Broadway’s legendary song and dance man, Tommy Tune, wrote a letter to the editor extolling the artistic merits of Jeffrey’s photograph and how he captured the magic of the moment.

“It was quite an honor coming from Tommy Tune, whom I admire for his artistry and accomplishments in the field of dance,” said Jeffrey. “The fact that he would take the time to write a letter to the editor…there really is no higher compliment.”

5 thoughts on “Thursday’s Picture of the Week: China”