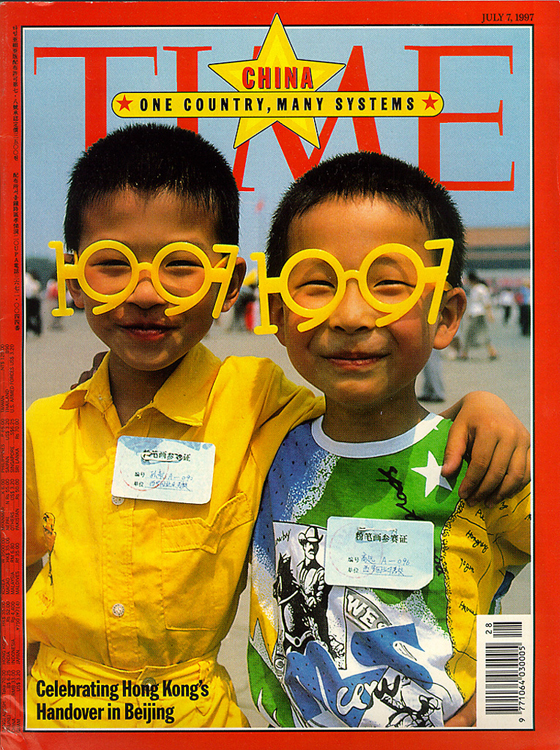 Behind the scenes: It’s late June 1997 and Hong Kong is about to be handed back to China after 150 years of British rule. Jeffrey Aaronson has been hired by Time magazine to document the events leading up to the handover ceremony, which is taking place at midnight on June 30th.

He has spent the past two weeks photographing all across China with one of Time’s senior correspondents, Joanna McCreary. They’ve ventured to several of China’s outlying cities, showing that while Communist leaders proclaim there will be “One country, Two Systems” with the Hong Kong handover, China is already comprised of a tangle of systems and economic policies created by local municipalities.

This is a memorable assignment for many reasons. One is that it’s an historic event. The other is that Jeffrey is arrested in the city of Suzhou. His visa has expired and the police have discovered he’s been working on a tourist visa instead of an official journalist visa. He’s always done that to avoid being controlled by government minders.

Locked in a jail cell, Jeffrey tries to ignore the sense of dread washing over him. A grizzly policeman glares with distain, then says between long drags on his cigarette, “You have until midnight to leave China. You’d better be on a plane out of here or….”

Once he’s released Jeffrey immediately begins trying to figure out his next move. He discovers there’s only one flight left to Hong Kong (which is still British for another week), but it’s out of Shanghai, which is least two hours away–on a good traffic day. He has less than three hours and he still must go back to his hotel and pack, then get to the airport, buy his ticket and board the plane.

After phoning the correspondent to tell her what has transpired, he’s in a car on the way to Shanghai. His plan is to fly to Hong Kong and apply for a new tourist visa—knowing China is still not computerized and not likely to discover his recent incarceration. Then he’ll fly into Beijing the next day and meet back up with the correspondent.

After a heart-racing drive and an absurd made-for-TV-sprint through the airport, Jeffrey catches his flight just as they are closing the door.

The next day, after working with Mr. Kwok, his seedy connection in Hong Kong, he obtains a new visa and lands back in Beijing.

The correspondent, who is well-aware of what Jeffrey has just been through, recommends he rests and lays low, especially since she won’t be writing anything about Beijing.

Jeffrey, who has never been good at laying low, ignores Joanna’s advice and heads out to photograph anyway. In Tiananmen Square he happens upon a group of school children doing chalk drawings in celebration of the upcoming handover. A large “countdown clock” is ticking down the hours and minutes until the handover, which the mainland is exuberant about.

When he photographs these two schoolboys sporting 1997 glasses, he’s glad he followed his instincts instead of laying low. He knows he has just created an iconic image for their story. And he’s right. It becomes the cover of the magazine.

A week later a similar situation happens. It’s the night of the handover ceremony and Jeffrey has been shooting all over Hong Kong, along with a small contingent of photographers working for Time. Each is assigned a dizzying number of symbolic events as the British say farewell.

Jeffrey is on a tight schedule trying to get from one event to the next. It’s the first assignment his editor has given him a cell phone to help with communication and logistics during this tricky project. It’s the size of a brick, but it’s indispensable.

He has spent much of the day with the last governor of Hong Kong, Chris Patton, and is now on his way to photograph the Britannia symbolically sailing out of Hong Kong Harbor. 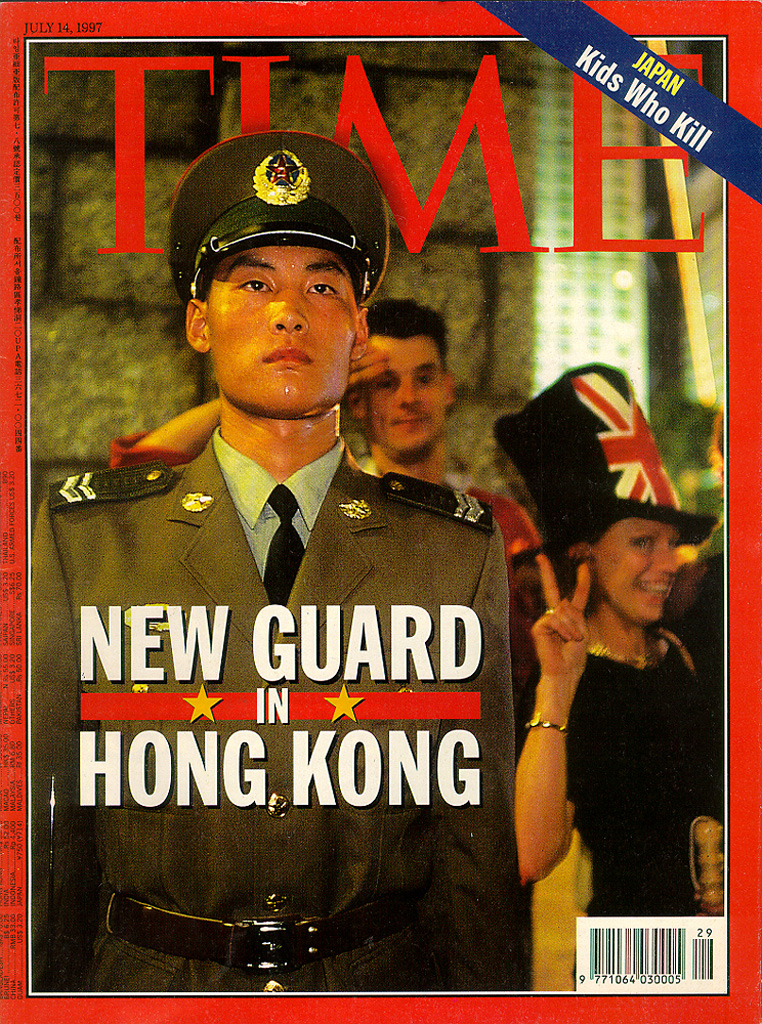 The streets are filled with drunk Expats as they try to forget about their future and their certain loss of British freedoms. On the way from one event to the next Jeffrey sees the first ceremonial Chinese soldier standing guard where a British soldier once stood.

It’s dripping hot and humid, and the crowd is growing more and more unruly, taunting the soldier. Jeffrey knows he’s late for his next event, and a call from his editor reinforces that. “Your car and driver are waiting for you. Please get over there now.”

“Give me ten minutes, “ he says to his editor, convincing her that what he’s witnessing could make for a symbolic photograph. While she has the driver circle, he creates another cover of Time, which runs the week after his previous cover.

“It’s often unplanned moments that make for some of the most interesting and important photographs. Sometimes you just have to follow your intuition, even if it means ignoring your editor,” Jeffrey later reflects.