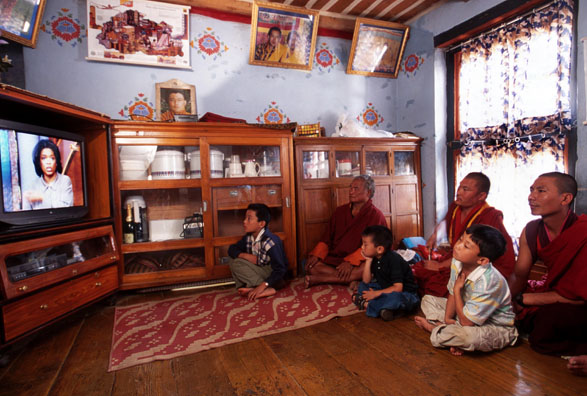 Take part in our first ever Improbable Caption Contest and win a $20 Amazon gift card.

First of all, please be assured there are no strings attached whatsoever. This is just my way of having fun and celebrating creativity.

Now, take a close look at who these viewers are watching on TV, and submit your best caption by simply drop it into the comment box.

Next Thursday, October 13th, I will select the winning caption and announce it here on the blog. The person with the most creative caption will be emailed a $20 gift card from Amazon.

Good luck! I can’t wait to hear your creative ideas!

Oh, and also, of course, I’ll be sharing the story behind this much-published photograph.

Each Thursday I will be posting one of Jeffrey’s photographs from around the world for people who have subscribed to my blog via email or RSS. It’s my way of saying, “Thank you for your support and interest in what I’m doing.” I hope you enjoy this image and the brief story behind it.

Behind the Scenes:  It’s 1982 and dense golden light bathes the streets of Bangkok, Thailand. Jeffrey is in the city photographing the 200th Anniversary of this vibrant and complicated capital. As he walks through the downtown area at dawn, he spots a large hand-painted movie poster about to be erected for American Gigolo.

The billboard, laying on its side, is a visual feast, and the perfect backdrop for creating an image that represents the often-unusual contrasts found in East meets West moments. Jeffrey composes his photograph then waits until two monks begging for morning alms walk into his frame, capturing their curiosity as they stand face-to-face with American heartthrob, Richard Gere. 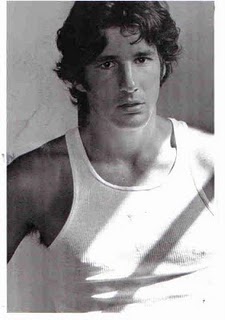 Squint and turn your head sideways and you can almost see Gere’s resemblance in this Asianized version. If not, you may need to squint a little more!

This photograph was created with a Nikon FE camera, a Nikon 24mm lens and Kodachrome 64 film.

It has been published several times, acquired by private collectors, and has even caught the attention of Richard Gere.

Look for my next regular THEN and NOW post on Tuesday! And as always, I’d love to hear from you. Leave your comments or questions and I’ll be sure to reply.

Thanks for being a loyal follower!

PS: More of Jeffrey’s Thailand images can be seen by clicking on this link: THAILAND.