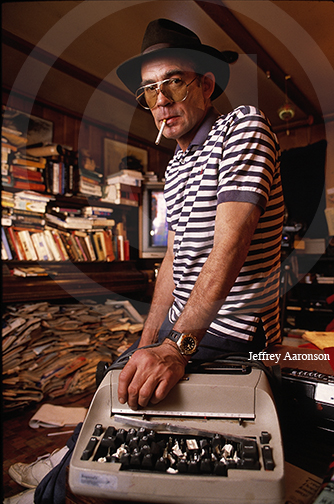 Behind the Scenes: It’s late January 1990 and Jeffrey Aaronson is photographing on assignment in Aspen, Colorado for Town & Country. The magazine is doing a major feature about the shakers and movers of this tiny mountain resort as well as the many bigwigs and socialites who flock there during the winter.

Editor, Anne Hearst, has flown in from New York to conduct interviews and coordinate several of the photo shoots. Her list includes everyone from billionaire David Koch to socialite Teran Davis to celebrities like Jill St. John and Robert Wagner.

“Gonzo journalist” Hunter S. Thompson is also on Anne’s list, which amuses Jeffrey since Thompson has always prided himself on being a counter culture icon–the complete opposite of everything the magazine represents. He’s skeptical Thompson will even agree to be photographed.

Midway into this grueling weeklong assignment, Jeffrey is beat. He’s been on the go since the crack of dawn once again—this time photographing models on snowmobiles in Aspen’s early morning light, in ten-degree weather, no less. Knowing he has another full day ahead of him, he turns in around 11:00 pm, only to be ripped out of his REM sleep an hour later. It’s Anne.

“Hunter Thompson just called and said we can do the shoot right now.”

Jeffrey groans, “You’re kidding, right? What time is it?”

“A little after midnight. Sorry…he said he’s just waking up.”

Jeffrey takes a deep breath, then slowly exhales. “Okay. I’ll be there in twenty minutes.”

The irony of Thompson agreeing to be in Town & Country is not lost on him. It’s clear this author of Fear and Loathing in Las Vegas: A Savage Journey to the Heart of the American Dream must be as interested in meeting Anne as she is in meeting him. Anne is not only an editor, but a socialite and philanthropist, and also the sister of Patty Hearst, who was famously kidnapped by the Symbionese Liberation Army in 1974. She’s also the daughter of Randolph Hearst, the former president of the San Francisco Examiner, and the granddaughter of newspaper tycoon, William Randolph Hearst.

Hunter Thompson may be a renegade writer, but the prospects of meeting Anne and also potentially gaining publicity for his upcoming book, Songs of the Doomed: More Notes on the Death of the American Dream, convince him to agree.

Since Jeffrey isn’t expecting a photo shoot in the middle of the night, he must quickly organize his film and gear before loading up his car and driving all the way into town to pick up Anne, who’s staying at the historic Hotel Jerome. The two will then drive all the way back out of town fifteen miles to Woody Creek, a small hamlet where Hunter Thompson lives.

Snow has been dumping relentlessly for hours, making the roads more than worthy of white knuckles. As Anne and Jeffrey slowly creep down Highway 82, the dizzying rhythm of swirling flakes makes them feel like they’re driving through a white kaleidoscope tunnel. At last they turn off at the Woody Creek exit and head down the dark, windy, two-lane country road toward Thompson’s house in Lenado, which is another five miles back.

Jeffrey hasn’t ever been to Owl Farm, Thompson’s property, so he struggles to find the driveway as they navigate through the snowstorm. Finally locating the landmarks described to Anne on the phone—wood rail fence with two large poles adorned with bronze vulture statues and “No Trespassing” signs, they pull in, relieved to finally be there.

Neither knows what to expect when they get to the door, and both are surprised when a woman with long brownish hair and glasses answers. “Hi, come on in. I’m Deborah.” They learn she’s Thompson’s long-time assistant.

As they enter they’re hit by the smell of booze and cigarette smoke. The low ceiling, wood paneling, funky couches and barrage of clutter make them feel like they’ve entered a house occupied by college students. It’s about as far from the Hearst Castle as Anne could be.

Thompson is nowhere to be seen. Jeffrey and Anne are told to scout around for a place to set up the photo shoot. As they wander, they notice two live peacocks strutting in a side sunroom. Then they discover Thompson’s library, which is the epitome of organized chaos. Books and papers are stacked to the ceiling.

After Jeffrey begins unpacking his gear, Thompson finally emerges, cigarette in one hand, drink in the other. It’s hard to decipher what he’s saying, but Jeffrey reaches to shake his hand, then let’s Anne introduce herself.

Thompson’s eyes are glassy and Jeffrey wonders what illicit things might be pumping through his body. Anne smiles nervously.

Jeffrey explains that he was thinking of photographing Thompson in his library.

“All right,” he agrees, “but I have to do something first.”

He then walks over to a pile of magazines and holds up a Hustler centerfold. Placing it on a copier, Thompson pushes the button, then loads the photocopied image into his fax machine and starts dialing a number. “The boys at the news desk are gonna love this,” he laughs.

“Chicago…,” he mumbles, clearly pleased with his boyish antics.

Jeffrey tries to act humored, but can already tell it’s going to be a long night. All he wants to do is create a unique portrait for the project and call it good. He begins setting up his lighting and mentally framing his composition, waiting patiently for the right time to try to get Thompson to focus on the shoot.

“How about I have you sitting right here?” he suggests as he points to a table.

Jeffrey raises his eyebrows and looks at Anne.

After a long stretch, Thompson returns from a back room seeming a little more juiced—his eyes dancing with mischief. This time he’s carrying a gun.

Jeffrey can feel his jaw tighten, knowing that an intoxicated, eccentric, gun-wielding writer is a perfect recipe for disaster. Trying to keep the shoot moving forward, Jeffrey pretends to ignore the gun, calmly pointing and saying, “All right, I’d like to photograph you right here.”

As he turns to set the power button on his strobe, Jeffrey hears Thompson ask, “Do you need the lights on?”

When Jeffrey responds, “No, I’ve brought my own lighting,” Thompson says, “Good,” then cocks his gun and instantly creates an explosion with a rain of glass.

Thompson is utterly amused as he admires the overhead light he’s just shot out in the ceiling.

Jeffrey’s patience is wearing thin and his ears are still ringing, but he refuses to react, knowing it will only encourage him. Instead he says, “All right then, so let’s….”

“Hold on,” Thompson slurs as he jumps up. “I gotta get something.”

Anne and Jeffrey look at each other, shaking their heads, trying to imagine what could be next.

Ten minutes later Thompson emerges with a Polaroid camera. “I wanna take a picture of you so I can see how I’ll look in my photograph,” he mumbles.

“You sit here,” he instructs Jeffrey, pointing to place where Thompson will be sitting for the shoot. Jeffrey obliges, hoping this will finally satisfy all of his idiosyncrasies. After Thompson composes the frame and clicks the shutter they all gather around to see the photograph emerging from the camera. “That will work,” Thompson says, finally giving his stamp of approval.

Once again Jeffrey tries to get him back on track. “Okay, so let’s have you…” he begins, only to hear, “All right, but I want to document this.”

The night becomes more surreal when Thompson suddenly feels compelled to set up a video camera in the room, which is connected to a big screen TV on the wall behind him. When Anne and Jeffrey appear on the screen, Thompson looks especially pleased with himself.

Anne tries to help focus him and also ask him a few questions, but Thompson says, “I’ll do this, but you have to come sit on my lap first and have a shot of tequila with me.”

Being a good sport, Anne goes along with Thompson’s salacious request.

Jeffrey can only be amused at the absurdity of it all—this photo shoot in the middle of the night with an heiress and a drugged out, gun-toting, video-making, Polaroid-taking writer who acts like more like an overgrown teenager than a 52-year old man.

Finally, after inhaling another ounce of patience, Jeffrey convinces Thompson to sit for his portrait. He gets off one frame before Thompson reaches for a wiry beige hat that looks like a British judge’s wig.

Jeffrey works quickly, clicking frame after frame, all the while trying to avoid being distracted by seeing himself on the big screen behind Thompson.

It’s then Jeffrey spots an old electric typewriter in the corner of the library, which Thompson has shot out the keys. The photo shoot is finally starting to come together. Thompson dons a black hat, pops a cigarette in his mouth, leans on his typewriter, then looks into the lens with his classic, “Fuck you” expression.

With that, Jeffrey breathes a sigh of relief, knowing he’s created something that represents the madness and genius of Hunter S. Thompson.

Afterward Jeffrey packs up his equipment while Anne continues to interview him. Thompson is more interested in having them stay for breakfast though, than answering questions. Anne considers the offer for a moment, but declines, feeling just as relieved as Jeffrey to be getting out in one piece.

When later asked to describe this photo shoot with Hunter Thompson, Jeffrey laughed and said he’d title it an evening of Fear, Loathing and Photography in Woody Creek: A Mad Journey to the Heart of the Hunter S. Thompson. It seems especially perfect, remembering one of Thompson’s quotes:

“I hate to advocate drugs, alcohol, violence, or insanity to anyone, but they’ve always worked for me.”

Jeffrey’s photograph of Hunter S. Thompson was created with a Nikon F4 camera, a Nikor 24mm lens and Fuji Velvia film. Images from this photo shoot were published in Town & Country and also many other magazines around the world. This portrait also later became an iconic obituary photo in Time magazine after Thompson committed suicide in 2005.

Want to know the funny part? Jeffrey actually went back to Owl Farm a few months later to photograph Thompson again—this time for The New York Times when his new book was published. The difference though, is that it was during the day when most of the effects of the previous night had already worn off. You might guess there were still guns involved.

©2013 Becky Green Aaronson, The Art of an Improbable Life

18 thoughts on “Fear, Loathing and Photography: A Mad Journey into the Heart of Hunter S. Thompson”