In honor of back-to-school time, I thought I’d post this story I wrote a few years ago about my dear friend, Janet. I was trying to find a home for it in a magazine, but perhaps this is where it is meant to be. You tell me.

When Janet breezed into our dorm room that first day our freshman year of college, I immediately knew what she was all about. She didn’t even have to open her mouth; her jacket said it all.

The denim, faded to a perfectly distressed milky blue, the collar frayed into strings of fringe, the buttons worn to a coppery patina—all swirled together into the epitome of everything a college girl wanted to be: hip, smart and carefree.

Her jean jacket was the real deal, and so was she.

In fact, her jacket seemed to gain a personality all of its own as it absorbed every ounce of college fun laid in its path. It also soaked up everything from our bad hairdos and purple eyeshadow to eccentric professors and weird boyfriends, weaving them deeply into its soft fabric.

At the end of our freshman year, life shipped Janet and me off into different directions for the summer. My dad had died of cancer earlier that year so I immediately began working several jobs to pay my way through our very expensive private college, while Janet sailed to Tahiti with her family on their boat. I couldn’t afford envy, so I celebrated her adventure, and made her promise to send postcards so I could live vicariously.

With hugs and tears, promises of letters, and plans to regroup in the fall, we parted ways. But not before she unceremoniously tossed a bag at me. “Here, I think it’s time for you to have this,” she laughed.

I had no idea what she was talking about until I peeked inside the bag and saw a lump of denim and fringe staring back at me. Before I could say anything, she jumped into her car and headed to the airport.

The warmth of Janet’s jacket immediately wrapped itself around me with a friendship so deep, it could only be described as the best of sisterly love. Not only did her tattered jacket make me smile, but it also carried me through a horribly challenging summer of work and living alone in my dad’s old house.

My dad’s widow, my stepmother, had already moved on with her life and planned to remarry less than eight-months after his death. Her gift to me was letting me take care of the empty house while it was being listed on the market to sell. I was grateful to have a free place to stay, but I often bumped around in that quiet old house. Putting on the jacket eased the silence and made me smile, even laugh out loud at times, thinking about some of the antics Janet and I had pulled over the previous year.

When I had to wake up at the crack of dawn to take a city bus to one of my jobs, Janet’s jacket gave me a sense of Zen-cool, even as I sat next to a drooling drunk and a mentally ill woman cursing at me as she praised Jesus. And when my own mom had to be hospitalized after having a mental breakdown, Janet’s jacket gave me an inner-steel I never knew I had.

That was twenty-five years ago.

During the next two and a half decades, Janet and I stayed best friends, living completely different, yet parallel lives. After college, Janet went to grad school in New York, then became a journalist, then later a magazine editor. I fell in love with a photojournalist and launched my career as a photo agency director, then later a writer.

In an ironic and fortunate twist, Janet moved to my home state, Oregon, and I moved to her home state, Colorado. With my relatives in Oregon and her relatives in Colorado, it made it easy for us to keep in touch whenever we visited our families.

Janet and I shared all of life’s ups-and downs together. She was part of my family and I was part of hers. I attended her parents’ 50th wedding anniversary party. She was there for my mom’s surprise 70th birthday party, and then shortly after, her funeral.

Janet was the “best woman” in my wedding, and I was hers. When I picked up the phone to share my news that I was pregnant, she screamed, “No way, so am I!” Our daughters were born eleven days apart. And without ever talking about baby names with each other, we both nearly gave our daughters the same name.

Over the years, Janet and I survived the stresses of miscarriages, caring for seriously ill loved ones, and heart-shattering losses of friends and relatives. But we also reveled in life’s simple joys together, celebrating motherhood, friendship, career leaps and athletic accomplishments. The lighter side of life was never far from us either. Common interests in books, music, and travel, often connected our hearts and minds, as did politics and exciting events like a smart new president being elected.

During that quarter century, I moved more than a dozen times, and each time, no matter how hard I tried to convince myself to give that jacket to the thrift store, I could never part with it. Every time my husband and I moved, I faithfully reached into the back of my closet and packed it up. But not before pausing and running my hand across the soft denim, thinking about all the memories woven into it.

A few years ago as I was preparing for a writer’s conference in Oregon, I came across Janet’s jacket in the back of my closet once again. This time I took it out and tried it on. Though the collar was little more than shreds of fringe, and the elbows paper-thin, it still fit perfectly.

“Wow Mom, that’s cool,” my five-year old chirped. “Are you going to wear that to your conference?”

I laughed at her innocent thought, but then realized she wasn’t too far off the mark. This jacket had always given me an extra shot of courage. Maybe I should wear it to the conference as I pitch my first novel to an agent, I chuckled to myself.

When I lifted the little flap on one of the front pockets, I half expected to find a college relic: a picture or beer tab, an old boyfriend’s phone number. Instead, in the empty pocket I simply found inspiration and the answer to why I hadn’t been able to give this tattered jacket to the thrift store or sell it on Ebay for an absurd amount of money; this jacket needed to be returned to the hip, smart person that it still epitomized. 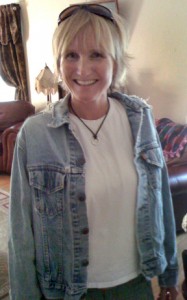 Janet and her famous jacket

Just like Janet unceremoniously tossed a bag at me twenty-five years ago, I did the same to her when I saw her the following week in Oregon. “Here, I think it’s time for you to have this back.”

Of course, she had no idea what was in the bag, nor did she even know that I still had her jacket all these years, but when she saw the lump of denim and fringe staring back at her, she fell backward on the couch and howled. “Oh my god, I can’t believe you kept this thing all these years!” We laughed until we couldn’t breathe. “Oh man, if this jacket could talk, we’d be in big trouble!” she choked between gasping for air.

As she tried it on, the fit was so perfect and the style so “classically Janet,” I knew it was finally back on the shoulders of the right person again.

I don’t know if Janet’s jacket ever made me hip, smart or cool, but it definitely made me smart enough to know that I’ve lived a charmed life; Janet’s friendship is one of the reasons.

I can only imagine what kind of bag will be tossed at me in another twenty-five years, but I’m certain it will be filled with more memories of our indelible denim friendship.

Do you have an indelible friend? If so, I’d love to hear about this special person. Leave me a comment and dazzle me with the details of your friendship.