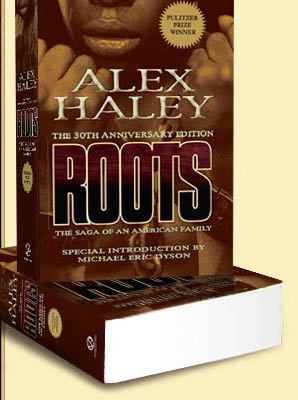 It may seem unusual to write a book review about a novel written well over thirty years ago, but I do so in hopes of inspiring you to pick up this powerhouse tome once again.

Roots: The Saga of an American Family has climbed to the tippy-top of my all-time favorite books.

For those of you who watched Roots, the blockbuster television mini-series in 1977, but never read the novel, you will be dazzled by the written version, and reminded why you were so mesmerized by Alex Haley’s epic story in the first place. You will also appreciate why it topped The New York Times Best Sellers list for twenty-two weeks, and why Haley was awarded a Pulitzer Prize for it.

Why did I pick up this book after so many years? Simple. I was inspired by fellow blogger, Debra Eve, who wrote a compelling profile about Alex Haley on her blog, Late Bloomers. Click here to read her piece and see why I immediately headed to my Kindle to download this 700-page masterpiece.

For starters, did you know the author was a college drop-out who didn’t begin writing Roots until he was 46? And did you know it took him a decade to complete? There’s hope yet for all of us late bloomers!

For those of you who may have forgotten the storyline or who may be too young to have heard it the first time, Roots tells the story of Kunta Kinte, an 18th-century African, captured in The Gambia as an adolescent and sold into slavery in the United States. It follows his life and the lives of his descendants in America all the way down to the author himself.

Haley is a masterful storyteller who develops his characters in such a rich and complex way that he makes it impossible for readers to remain emotionally unattached. His writing makes us want to cry, cheer, hold our breath, pray, scream, and in the end either love or loathe a character.

My timing in reading Roots couldn’t be more powerful as I also recently saw Lincoln, which reveals yet another dramatic angle of our country’s dark history, and Abraham Lincoln’s quiet, heroic push to end slavery. I won’t review the movie here, except to say it should not be missed. To learn more about the film, you can check out my fellow bloggers, Elizabeth Cassidy and Nicole Dauenhauer’s review at Femme Fatales (click on the link to read it).

My timing also seems poignant as we celebrate Martin Luther King, Jr., who worked tirelessly to bring equality not only to African-Americans during his short life, but to all Americans. He would have been turning 84 today. Can you imagine all the other things he might have been able to accomplish had he not been assassinated by a bullet filled with hatred and ignorance when he was just 39 years old?

While our country claims to have moved past the deep wounds of slavery, racism and the Civil War, there’s clearly still a shadow hovering over our nation, particularly in the midst of our current political climate. While we may finally have our first black president, few presidents have ever encountered so many roadblocks during their tenure. And while Texas professes its current bid to secede from the union has nothing to do with the color of Obama’s skin, many have their doubts. Race also still plays a profound role in education, healthcare, economic issues and our justice system.

There are few easy answers, but as we read Roots, see Lincoln, and remember Martin Luther King, Jr. (click here to read my tribute to him from last year), we are reminded that our nation has come a long way, but still has a long way to go. More importantly, we are reminded that we are capable of change, and of greatness. That is when we want greatness for all.

As Dr. King once said, “The time is always right to do the right thing.”