Never in my wildest dreams would I have imagined the story below being inspired by this photograph of a woman walking along an allee of trees in France, but this is what swirled together during a “progressive story” project I posted on my blog last week. Each person added a new line or idea to the narrative, and voila, this is what it turned into… 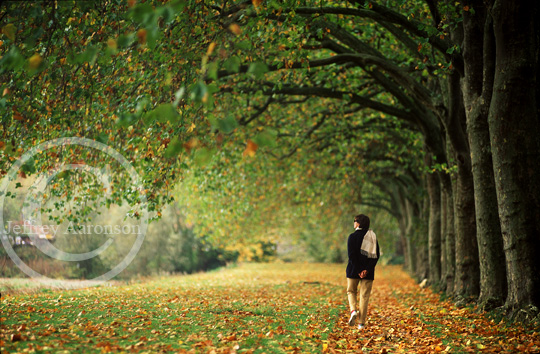 I never imagined I’d be here at this moment in my life, but…

Grandfather told me in his last letter that he wanted me to always be honest with myself and others. I’ve chosen today to tell my family about my partner.

I never thought I’d choose the weekend of his funeral, but here I am in the very place I swore I’d never come back to, as beautiful as I remember, and still haunted with the very things time and distance would not let me forget.

I spotted Aunt Nadine first, who always had a soft spot for me, and touched her shoulder. For a second she didn’t recognize me and I braced for the familiar pang in my gut as my eyes searched hers expectantly. But then she smiled, and I felt the moment expand with relief and gratitude.

“How are you?” I whispered quietly. Without answering me, she asked, “You are looking restless and nervous; it seems like something is hurting you from deep inside.” I stepped back, shocked that my inner turmoil was visible to others, others I haven’t seen in so many years.

“Come into the house,” she continued. “I knew you were coming. I made your favorite, chicken pilaf.”

I had been away for so long I imagined I wouldn’t be welcome. Instead, upon hearing her words the years and distance just disappeared. I felt like the prodigal son who’d returned home. Prodigal son or not, I knew I couldn’t let her kindness get the better of me, as I’d come for a purpose, to be true to myself as Grandfather had taught me, and so without further hesitation I blurted out, “Aunt Nadine, I’m gay, and I want you to meet my partner; he’s waiting in the car.”

As the two started down the porch steps, the screen door flew open, propelled by anger that had built up over two decades. “What the hell are you doing here?” a man bellowed. His gray hair framed his pewter eyes and angular jaw. “I told you long ago that you are no longer welcome in this family. How dare you show up here on the weekend of your grandfather’s funeral.” Taking a step forward to continue his rage, Shane’s father suddenly grasped his chest, fear now replacing anger as he fell against the porch railing.

Shane rushed to help his father and the sound of a car door slamming interrupted the screams of Aunt Nadine.

“Dad, I love you!” exclaimed Shane, taking a step toward his father, and with his arms outstretched, he continued, “It’s been too long and I want a truce.” As he said this, he saw his father’s eyes soften, perhaps knowing that he was right. It was time to settle old grudges, and accept his son for who he was.

The reunion was too short. Shane wanted to linger in the gaze of his father’s love longer but the gunshot echoing overhead took both of their gazes back to the front porch, where there, dressed in his Sunday best, stood his grandfather as alive as any of them, holding his old hunting rifle, which he’d just fired into the air.

“If you’re here, who was it we just buried?” Shane asked.

Aunt Nadine interrupted saying, “Before you answer that, shouldn’t you introduce us to the young man who’s been standing here for the past ten minutes looking at us like we’re crazy?”

A young man wearing a hunter green jacket and plaid slacks stepped forward from beneath the shadows of a jacaranda tree. Looking straight into the eyes of Aunt Nadine, he said glibly, “Aunt Nadine, is it? I’ve been standing here for quite a while, wondering when anyone would notice me. I am Shane’s partner, for the last five years, and together we have just adopted a child. Would you like to meet her or is this a bad time?”

The weight of silence nearly suffocated Shane as he looked from Aunt Nadine to his grandfather, then finally his father. It was only the tiny chirp of a voice that pierced the tension, allowing everybody to breathe again.

“Grandpa?” she whispered as she looked up from her pink sparkly cowboy boots.

Shane’s father was taken aback by her beautiful cocoa skin, long eyelashes and the rainbow of color adorning her cornrow braids. Her sweet presence disarmed every grown-up she’d ever met. Her grandfather was no exception. All he could say was, “It was worth staging my own death to meet my great-granddaughter! Now, everyone close your gaping jaws and mend your fences while I get a hug from the most beautiful little girl I’ve ever met and get to know the apple of my grandson’s eye. Nadine, hold my gun.”

7 thoughts on “The Story That Was Told”